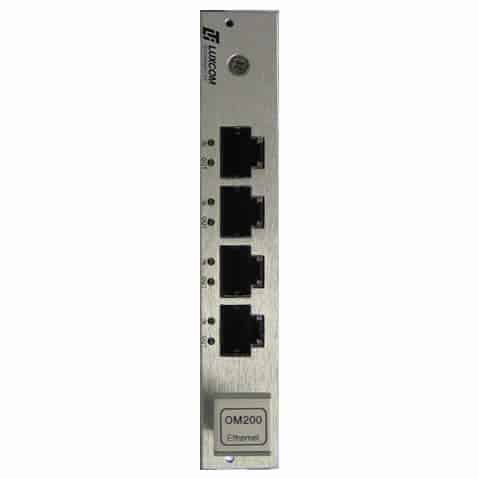 The Ethernet Interface is a four port 10BASE-T/100BASE-TX Ethernet switch which connects through the OM200 network to other Ethernet interfaces.

Channel Bandwidth: The channel bandwidth can be as low as 0.5Mbps and as high as 100Mbps depending on how much of the SONET bandwidth the user is willing to allocate to a card. The specifications show the percent of total SONET bandwidth which is used for each data rate.

VLAN: In a point to point configuration (only two cards share the channel), the network management software can establish a VLAN between ports in each card; i.e. Port 1 data will only exit on the remote card’s port 1; ports 2, 3, 4 are similarly isolated. The VLAN tags are added at the ingress port and stripped at the egress port. All four ports share the same channel bandwidth; this allows higher data throughput when any of the ports are idle. The VLAN must be set up before the card-to-card connection is established.

Port Dependent Options: Each port can be independently set to Auto Negotiate speed, and full/half duplex; its speed/duplex can also be forced. As well MDI/MDI-X crossover can automatic or manually set.

This Luxcom product is warranted against defects in materials and workmanship for a period of five years from the date of shipment..

Luxcom will, at its option, repair or replace products that prove to be defective during the warranty period provided they are returned to Luxcom..

Repairs necessitated by misuse of the product are not covered by this warranty.

The Luxcom family is proudly vaccinated for your safety.